On March 15, 1808, Tuscarawas County became the 27th county to be officially recognized by the State of Ohio. Early meetings of the county officials were held in a local tavern and on June 28, 1808, the County Commissioners authorized the building of a two-story structure with a jail on the first floor and county offices on the second. A contract for this log building which also served as a church was given to Peter Minnich for $1,500. It was 30' by 40' and was constructed on lots provided by New Philadelphia founder, John Knisely.

In 1818, the county had outgrown the building, and the Commissioners advertised for a new building. It was not completed for seven years, and the contracts totaled $7,468. When the 1825 Commissioners had financial difficulties, they rented an upstairs room in the building to the Masonic Lodge #59 for $12 per year. The architecture of the building was like that of the original state capital building in Chillicothe. Most of the first floor was used as the courtroom. The Clerk and the Auditor each had one office also on the first floor. The second floor had a separate room for juries. The building was renovated in 1837 after fire damage, and the courtroom occupied the entire first floor post renovation.

In 1882, the county's third courthouse was designed by architect Thomas Boyd and built by T.B. Townsend of Zanesville for a contract price of $98,860. Townsend purchased the old building from the county for $900 and used the bricks for fill material for under the new building. On October 25, 1882, the cornerstone was laid after a parade longer than 2 miles, which converged on the Public Square. Over 10,000 people attended the cornerstone laying ceremony. The stone for the building was from a quarry in Medina, causing a special railroad track to be built to the site of the Courthouse. The building was 96' by 112' and consisted of 38 rooms on 3 floors and an attic.

This Courthouse was constructed with a dome with a statue of 3 women made from zinc or lead-like metal weighing more than 699 pounds and was 10' wide. It was called the Three Ladies of Justice and had to be removed for safety reasons in 1959. The heads of these ladies are on display in the Commissioners' Board room. Topping the dome today is a cupola which was lifted into place by a helicopter on July 26, 1973. Currently the Courthouse building houses the Common Pleas courtrooms and administrative offices of Judge Judge Elizabeth Lehigh Thomakos, Judge Michael Ernest, and Judge Adam Wilgus. The ground floor houses the Mediation Program for the Court of Common Pleas, and the Board of Elections. The Courthouse is on the National Register of Historic Buildings.

The second county courthouse was adorned by a weathervane in the shape of a fish on top of a ball on a long red rod, known as the "Weatherfish." Upon removing the weathervane to construct the third courthouse, large holes were discovered in the ball portion which were believed to have been caused by celebrating Civil War veterans during their returning home parade and celebration.

The 1882 Courthouse houses an 1888 Seth Thomas clock with solid brass gears. It is 8' tall and has a 225 pound solid cast iron pendulum. The faces on the portions showing outside are 6' in diameter, made of glass 1" thick. The clock has to be wound once a week with the help of a small motor. The bell is rung by a hammer.

On October 27, 1990, the Tuscarawas County Office Building, adjacent to the Courthouse, was opened to the public for its dedication and open house. The building was designed by MKC Associates Inc. and has a total of 54,500 square feet. The land was obtained by the county after a fire destroyed the existing building on the lot. 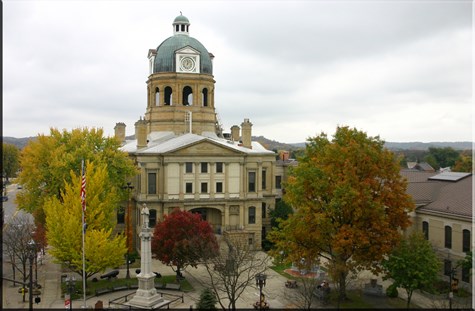 During 1995 and 1996, a renovation was completed of the 1882 Courthouse, with design help from Fisher and Associates Architects Inc. The emphasis was to restore the building to its original splendor. The wood trim was stripped to its original black walnut color, the ceramic tile floors were cleaned and repaired, the ceilings were raised to the original 14' height and the walls were painted using historic Victorian color schemes. A canvas mural depicting lady justice complete with scales and sword was discovered beneath a lowered ceiling. It was restored and framed and is on display in Judge Thomakos' courtroom. 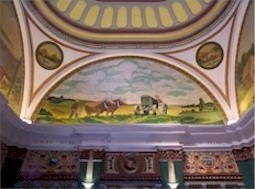 Supreme Court of Ohio - Information on the Tuscarawas County Courthouse